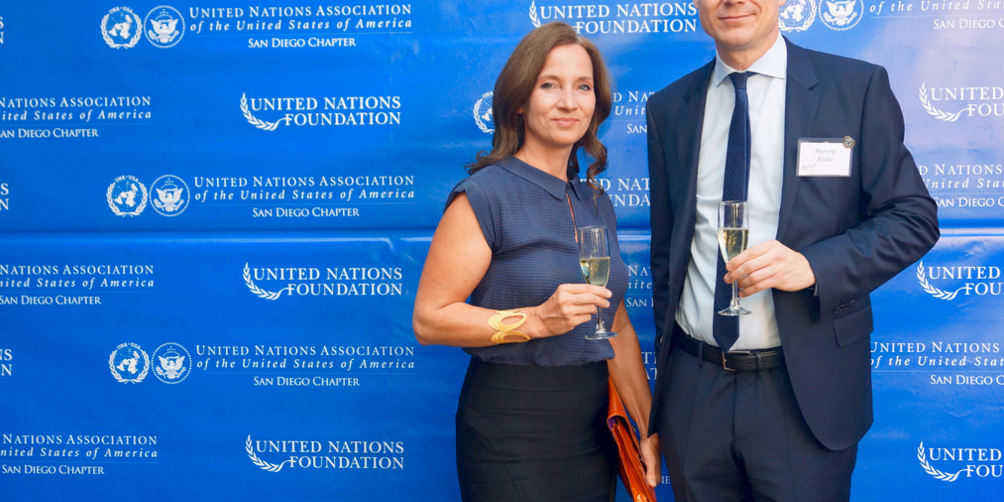 In celebration of the 70th Anniversary of the United NationsEleanor Roosevelt’s Grandson Ford Roosevelt visited San Diego on October 24th, 2015. The gala washosted by the UN Association San Diego at the Prado Ballroom in beautiful Balboa Park, co-sponsored by German American Chamber of Commerce California. The community, sponsors and guests were invited to join this special event commemorating a wonderful trifecta that bridged global commitment with local advocacy – the seventieth birthday of the United Nations, the sixty-ninth anniversary of the association’s Chapter in San Diego combined with the celebration of Balboa Park’s one-hundred years, a place that the UN Association’s office resides in since its beginnings.

At the luncheon guest of honor, Ford Roosevelt, Grandson of President Franklin Roosevelt and Eleanor Roosevelt, Keynote Speaker Stephen O’Dowd, Director of the Office of Economic and Development Affairs for the U.S. State Department and Chris Whatley, President of the UN Association of the United States of America were warmly welcomed by the Gala Chairs Joanne Tawfilis, U. S. National Commissioner, UNESCO President and Bettina Hausmann, UN Association San Diego. Furthermore Dr. Dee Aker, Director of the Institute of Peace & Justice at USD was honored with the prestigious Eleanor Roosevelt Human Rights Award.

For seventy years the UN Association has advocated for human rights and humanitarian causes by, among other measures, holding worldwide briefings and by involving young students at schools as well as adults and professionals into their programmes.

The German American Chamber of Commerce California supported the anniversary event with a charitable donation and in her speech Bettina Hausmann expressed thanks to Peggy Fleming and Steve Riedel for their great support. See event photos.