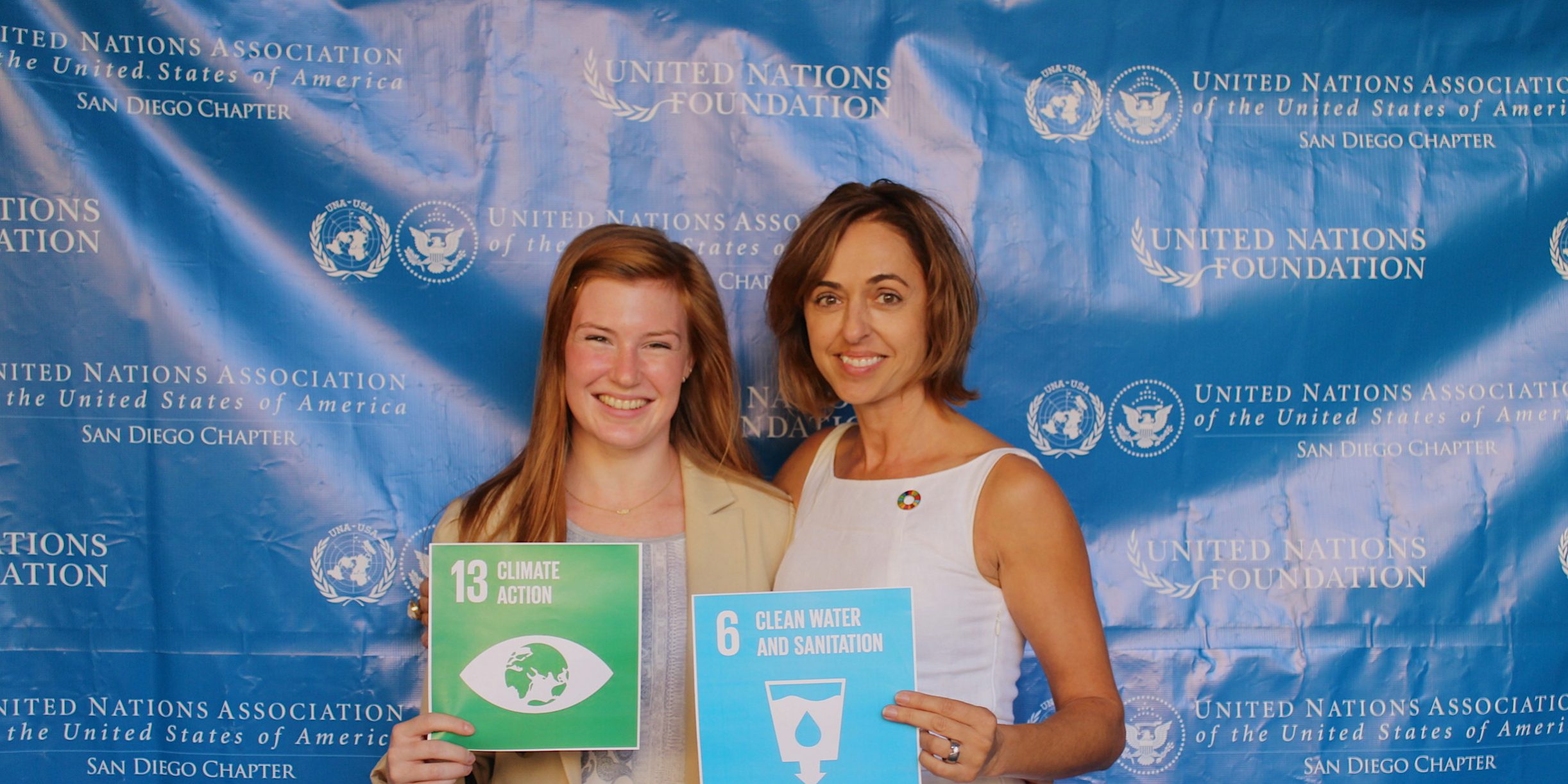 On October 21, the United Nations Association of the United States of America San Diego hosted a three-hour luncheon on the occasion of this year’s UN Day. The event took place at the beautiful Prado Ballroom in Balboa Park. Among the guests was GACC California. We extended the invitation to an outstanding student from La Jolla High School, Alexandra B., an avid participant of the Model United Nations Class, to get a deeper insight into the work of the United Nations.

Global Goals – Local Leaders as the powerful topic encouraged the attendees to think about the importance of starting movements towards one humanity with small steps, on a local level, eventually leading to greater actions in the world. Bettina Hausmann, the President of UNA-USA San Diego, welcomed the guests with an uplifting speech, mentioning the seventeen Sustainable Development Goals and how we all need to think as one when it comes to achieving their implementation on a global level. Innovations by the younger generations in our local communities, to make this world a better place, are of utmost importance.

In the course of the event, three awards were given out. Rhea Kuhlman, the President of Women’s Empowerment International was the first one to receive an award that day, namely the Global Citizen Award. She helps to provide women all over the world with a resourceful network and the tools they need to build their own, self-sufficient businesses to support their families in areas like Haiti and Mexico where the poverty rate is rather high.

Afterward, Hayden Sonnad was awarded the Global Corporate Citizen Award for Tesloop, of which he is the Founder. Tesloop is a ridesharing service that was invented with clean energy in mind. Specifically working toward achieving the Climate Action Goal, as one of the seventeen Sustainable Development Goals, Sonnad emphasized that the transport sector needs new innovations to cut harmful emissions.

After lunch, Stéphane Dujarric, U.N. Spokesperson having traveled all the way from New York, allowed an insight into “what’s happening on the 38th floor in the U.N. Headquarters.” Prevention be the main focus of the new Secretary General, António Guterres – namely prevention of people having to escape their countries and tackling problems at the root. The biggest challenge we are currently facing is the migration, the movement of people into different cultures in their endeavours to begin a better life. Dujarric points out that “mass movement is full of opportunity but needs to be regulated to see the benefits and not let drug dealers and traffickers, for instance, take over.” He suggests an open dialogue with the countries of origin, the transit countries, as well as countries of destination. “We are facing a crisis of solidarity in this mass movement, yet, we all share a desire of peace”, and that should drive our actions.

Before the last award, the Eleanor Roosevelt Human Rights Award, was handed over to Carrie Hessler-Radelet, as a final item on this year’s UN Day agenda, Ford Roosevelt, the grandson of Eleanor and Franklin Roosevelt, talked about the important work of his grandmother in the field of basic human rights. Hessler-Radelet is the CEO and President of Project Concern International (PCI), dedicated to helping young women from socially deprived families build their own lives by teaching business development skills in the course of “WE” (Women Empowered) Groups. It is shocking to hear that of roughly 250,000 students in San Diego county, four percent are considered homeless at night and need ways to help themselves to better their futures. PCI is active throughout the world, but starts here in San Diego – on a local level, as a roof over the head is only one of many basic human rights, or at least should be.

GACC California was among the proud sponsors of this year’s UN Day and thanks UNA-USA San Diego for the wonderful partnership throughout the years, as well as invitation to the event.